Kultuurpakt Belgium writes: "The result is magical. One gets the feeling of standing in front of the gates of the Holy Grail castle and the sun is shining on the towers, to make us experience a higher power inside. This album can be enjoyed by hard metal fans as well as fans of classical music, and each will be transported to their world of imagination".

From the film "Organist Idenstam - Licence to Dance" by Jonathan Eyre. Drawings by Polina V. Shumova


2021 is a year of learning new repertoire, composing and arranging. However I am happy to get invitations from USA, Canada, Spain, Germany, France and Russia for as long ahead as 2022. Hopefully most of the scheduled concerts in 2021 will take place, but nobody can tell for sure because of the pandemic. Let us all keep our fingers crossed.... Gunnar Idenstam has started his collaboration with the international publisher Le Chant du Monde, Paris/London, where the first works to be published are the complete Metal Angel suite including the Symphonic Sonata.

In 2013 Gunnar Idenstam received the Royal Medal Litteris et artibus by His Majesty King Carl XVI Gustav of Sweden and the same year he was elected into the Royal Swedish Academy of Music.

In 2012 Gunnar Idenstam was awarded the prestigious Interprete Prize by the same Academy. The Jury said of Gunnar Idenstam: "He has created his own musical platform and with a sense of tradition and renewal he brings influences from different genres, far from the traditional organ world, into the context of organ music. With a dazzling technique, serious and yet playful, and with revolutionary improvisations, he creates organ art on the highest international level." The Prize was presented to Gunnar Idenstam on November 26 by His Majesty King Carl XVI Gustav of Sweden. 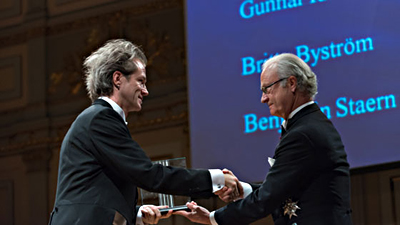