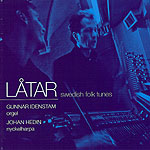 Welcome to our world of folk music!
Folk tunes - the pacing, decorations and phrasings - there is much in common between Swedish folk music and the baroque. Many of the Swedish polska were written at the same time as the aristocratic music that we today call baroque, and who knows? Perhaps Swedish players heard the German, French and Italian musicians who were active in Sweden at that time?

Here you'll find polska and other dances in the late Baroque style of the 18th century, a waltz seasoned with a touch of Spanish renaissance, bass lines, comp and riff that we feel bear close resemblance to rock, reggae, medieval music and gospel.

There's also an anonymous dance from Italy and several new compositions of our own. We think that the different pieces are deeply enriched by each other's presence. The tunes and their structures go well with one another, side by side or interwoven into a simultaneous tapestry, either by virtue of their contrasts or because they sound good together. The organ's ability to sound like a folk band throws the polyphony, both visibly and audibly, into sharp relief with itself. Drone bass pipes, cool bass lines, warbling flutes and penetrating trumpets lead the nyckelharpa in a wild polska, a dance that reels amongst the more shadowy nooks of the church and through the arches and up out of the steeple windows...

We hope you enjoy the ride

The CD LÅTAR Swedish Folk Tunes can be ordered
on www.cdon.com 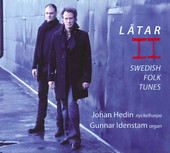